Take 5: A Return to Retail Roots 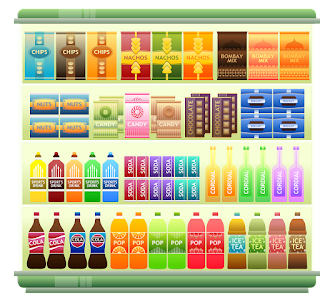 I have had the good fortune to work in a variety of roles in retail, both directly for a retailer and as a retail consultant. A few years ago, I took a break from consulting to work directly for one of my clients as their head of planning for wholesale, retail, direct, and outlet channels—it was amazing to refresh my skills at one of the hottest luxury brands on the market. However, after four years of doing the same planning cycles, my consultant ‘happy feet’ got the urge to go back and discover where I could help clients improve their processes through transformation.

My most recent consulting project gave me the great opportunity to spend time in a place I had never been—Wisconsin. Now, almost two years later, I practically feel like a local. We started a planning project through common phases of a system implementation—design, build, test, train, organizational change management (OCM), and sustainment. We faced expected challenges such as gaining consensus on requirements, sticking to decisions, varying approaches to designing a limited set of reports—all while maintaining an environment of positivity on a project that had plenty of ups and downs.

One area where we, as a project team, were quite firm was our approach to user acceptance testing (UAT). We pulled merchants and planners out of their jobs for 5 two-hour sessions per week for five weeks. These UAT sessions were not optional, and we received leadership alignment that this level of testing was necessary for quality results. We wrote detailed test scripts that were provided to merchants and planners, and they were required to complete them all and mark tests as passed or failed. Tests were performed multiple times by multiple people to ensure consistent results.

Knowing we’d (essentially) be locking people in a room for extended periods of time, I took on the role of Chief Merchant, Planner, Allocator, and Inventory Control for a highly critical task: snack procurement. I took this job very seriously, as I was facilitating assortment planning testing with the merchants and wanted them to be comfortable. There was also another consultant facilitating the item planning sessions with planners—this individual was in a different building and responsible for that team’s snacks. To anticipate the needs by week, I started with a simple forecasting model so I could ensure there were ample amounts and budgeted appropriately. I also wanted to find a local supplier of product that was broad and deep enough to meet our needs. The grocery store was perfect.

I broke the snacks out into two categories – Salty and Sweet. Then applied some simple calculations:

Take the number of students * number of sessions, anticipate the “average per student” (APS) of each snack type in each session. This gave me total demand per category. Then, after scouting out the supplier, I took a rough estimate of the number of pieces per bag/box to get the total number of cartons necessary. With an average price per carton, the total cost could be calculated. This was then divided by the number of weeks so I’d know how many bags I would need to purchase weekly, as well as the expected cost.

On the initial shopping trip, in order to have safety stock, I purchased 1.5 times the planned demand for the week – 5 bags of salty products and 6 bags of sweet products at a minimum. The week started simply: 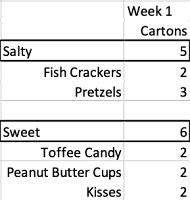 Each day I would do a physical inventory at the end of each session to see what needed replenished, and what was (for lack of a better term) a dog that should not be replenished. I also wanted to add novelty/fashion products to change things up from time to time. Good news was this took place in October, when there is a plethora of individually wrapped candies and savories from which to choose.

I had also purchased one novelty item in each of the categories and introduced them on Day 2. This included raw almonds and rice/marshmallow treats. Both were received very well and were cannibalizing within their respective categories.  Unfortunately, the planner UAT team in the other building caught wind to the snack assortment in my building and were decidedly disgruntled. Apparently, their facilitator “called it in” and only got the fun size assortment where the little, dark chocolate candies were pitifully left in the bottom of the barrel at the end of the day. That facilitator ended up making an emergency run to a big box store to broaden their assortment and attempt to provide a consistent experience across both teams.

The following week, I replenished with different cheese crackers—which I discovered were not as popular. The feedback was that, although tasty, they left more residue on people’s fingers, making continuing their testing slightly cumbersome. Also, a previous test revealed that fruit wasn’t popular with this crowd, but I determined that fruit is really all about marketing (in this case). One of the team member’s family has a local orchard with a specific apple that senior leadership loves and has raved about. I procured a bag of those apples, and—although initially passed by—after telling the background, they ‘sold out’ by the end of Week 2.

Week 3, I added some cream-filled cookies and peanut butter crackers, but the biggest surprise was when I put out Take 5 candy bars. You may or may not be familiar with them, but they are a chocolate, peanut, caramel, and pretzel delight. At first, no one in my room was trying them, so I became a Take 5 pusher (“you gotta try it”).  After the initial trial, people were raving about these mass-produced chunky morsels of deliciousness. They sold out by the end of Tuesday in Week 3. I went to the grocery store and restocked—buying every bag on the shelf, anticipating that word of mouth was going to kick in. I only put out a couple at a time, because they immediately disappeared.

In no time, my customer’s team members started coming to the testing room with “important papers that their colleague had to have right now.” They would stroll past the candy bucket and stealthily swipe a Take 5 or two. Suspicious, I demanded to see the important papers in the handed-off manila folder, but they were nothing but blank pieces of paper. At some point, I was the only person in a 30-mile radius possessing a private stash of Take 5’s, and people would stop by where I sat when not in testing—trying to score a fix. “Just one, please?” they’d plead.

I’d always give in.

Anyway, we finished testing, and thanks to the strong participation of the merchant team and their diligence in completing the test scripts, when we went live, the systems were essentially bug-free. Lots of follow-up training will ensue, but nothing was really wrong compared to our design. Mission accomplished—and I would like to think I could attribute at least a tiny portion of our success to the team’s contentment afforded by the attention to snacks.

Looking back on my snack procurement duty…I do fear this task is not without long-term repercussions on the local grocery store. Since they quickly sold out of Take 5’s, I would anticipate that for Halloween Year 2, they will likely overbuy. As many are still unaware of the magic that is this confectionary, absent the demand from our testing team, the store will likely not have their forecasted sell-thru. Post Halloween, most candy goes to 50% off, so people buy it because it is heavily discounted, and only then will these new consumers discover the delectable wonders of the Take 5. Flash forward to Halloween Year 3, the store will underbuy—if they buy at all—and unfortunately face backlash from the hoards of new Take 5 fans storming their doors. It won’t be until Year 4 when the forecast accuracy balances out for the Take 5 demand.

On a personal note, even though it wasn’t a ‘real job,’ I really enjoyed being a merchant and planner again for those five weeks. I geek out over retail math and loved going back to the job I did when I started in retail in 1989—well before we had sophisticated tools to support processes—and we ran retail using accounting paper and a calculator. It’s great to return to our retail roots once in a while.

I do recommend trying a Take 5 and letting me know what you think—crowdsourcing the opinion on this wonderful treat.  Or…as it’s officially National Pie Day–maybe a piece of pie?