Organizational Change Management: Who owns it? 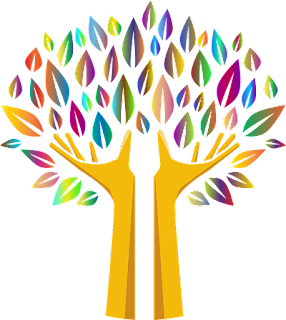 Let’s start this discussion with a one-question pop quiz:

What function in an organization ‘owns’ Organizational Change Management (OCM)?

Before you answer, let’s take a step back…

Many of us wrestle with the notion of OCM—for starters there is always the underlying question: can change really be managed? It does involve people (as in adults) who behave unpredictably and usually like to make their own decisions. Secondly—business is change, especially retail, so should we expect one team or function to own the expertise for navigating it? Some would argue it’s a core competency every manager and leader needs. Lastly—OCM has an abysmal failure rate, which may prove many people’s point that change cannot be managed. 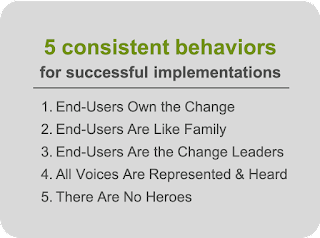 But, as an organizational change professional, that’s not a popular opinion to espouse. Over the past few decades The Parker Avery Group has worked with dozens of organizations in developing and implementing new business programs, processes, and systems, and all of them demanded parts or all of the organization to change. Some of the implementations were highly successful and others…not so much.

1. End-Users Own the Change
For the last few years, I’ve participated on teams implementing new systems and technology changes, so (almost) by default, the information technology (IT) department owns the project and any related OCM efforts. Yet, the end-users are not the IT folks, but mere mortals like merchants and planners and finance teams who actually use the technology daily to do their jobs. Ask yourself the following questions:

If any of your answers include IT, then I guarantee an uphill climb in getting the end-users to embrace the technology. End-users need to make and own every decision along the way—that only happens when the support function(s) act as advisors and present the potential options in an objective and fact-based manner. Support functions can never assume they know what’s best for the end-user.

2. End-Users Are Like Family
In most cases you don’t get to pick end-users, but like family, you are stuck with them. Depending on the project, we usually interact with specific areas of the organization, so we advise our clients to form a core team of business representatives. We don’t select them, but we do need convert them to ‘believers.’ The core team members often bring competing agendas, adversarial relationships, and pre-conceived opinions about other team members, so someone needs to align and prepare them for the arduous journey ahead. In most cases the ‘someone’ is me and my colleagues. We need to quickly establish shared goals, set the ground rules, and help them productively interact with each other.

3. End-Users Are the Change Leaders
And, they’re from all levels of the organization. The team learns it’s a long and messy process to move through the transition, so we help them understand how they each respond/react to change, so they better manage themselves. It’s also about helping them recognize how others react to change because they are the change influencers and leaders, the people in the trenches who others look to for guidance; they need the right skills and support to help get themselves and others through the transition.

4. All Voices Are Represented and Heard
The traditional top-down structure needs to leave the building. The steering committee, advisory board, and core team need equal representation. Every level needs a voice and a legitimate opportunity to contribute and participate along the way. Consensus is not necessary, but no final decision should come as a surprise to a vested party. The only way to ensure this happens is to employ rock-solid decision-making techniques that feel equitable to all. 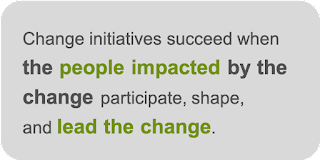 5. There Are No Heroes
Nor are there white knights, princes, fairy Godmothers, or unicorns that gallop in to save the day. Forget about the silver linings and the rainbows and kittens. Change calls for a healthy shot of realism—and the ability to slog through the fog when you’re not sure where you’ll end up. Change is a contact sport; people get knocked down, but then stand back up. They move forward and then get shoved back. They get a few wins and suffer some defeats. But if change is going to stick, they get comfortable with messes. No one person, or function is responsible for the success, or failure of a change initiative.

Change initiatives succeed when the people impacted by the change participate, shape, and lead the change. It’s that simple and it’s that hard.

We invite you to read more Parker Avery thought leadership related to OCM: